When new houses are built in Hook Heath a levy called 'infrastructure' is charged. Sums of money in the 10s of thousands may become available. With appropriate approval, this can be spent on infrastructure projects.

The projects at the top of the list for funding are:

Gorse Hill Hotel closed to the public as it helps NHS

The hotel is closed to the public ( new sign at the entrance) however they have taken on a very positive role in supporting Woking and Surrey NHS. They understandably do not want local resident mis interpreting this activity.

Just an update to pass on as our neighbours are likely to see Gorse looking very busy in the coming days / weeks. We are becoming an NHS Support Facility providing beds for doctors and nurses, packed lunches for up to 1000 community healthcare workers and training facilities for retired medical staff and volunteers. We are running things at cost price for them. I don’t want the neighbours being confused and questioning why we have everything up and running during a lockdown.

click her to see the neighburhood watch burglary update

I write to you to raise a concern that I feel you should be aware of effecting some of our community.

We have had a number of reports of vulnerable, elderly or isolated individuals who have been approached by people purporting to be police officers over the phone. A typical scenario is that the ‘officer’ provides their name and warrant number (which is fake) and then informs them that their bank account has been compromised. They are then told to collect cash from their bank whereupon it is collected by the ‘officer’.

This is a scam, and the victim is being defrauded.

Please remember that neither the police or a bank will ever cold-call you and ask you for any personal details, banking information or task you to collect money.

Please share this message with your friends and family to keep them safe.

Surrey Police can be called via 101 or via online reporting in a non-emergency; 999 in an emergency; Crimestoppers to report anonymously.

Over the weekend we have experienced an unusually high number of dwelling burglaries, scattered across the Borough: 7 in total since Friday.

This is unusual for Woking – I ask that Woking residents remain alert rather than alarmed, but keep an eye on each other’s property, particularly if friends, family or neighbours are away on holiday.

Please consider the following basic advice:
1. Keep an eye on friends’ family and neighbour’s property, particularly if they are away.
2. If you are going away, be smart about how your property looks to a stranger – is it obvious you are out or away? Ask someone to move your car; leave lights on timers; ask someone to clear milk or papers from visible areas.
3. Use your house alarm or shed alarms, and if you do not have one, consider having one installed – at the very least a dummy box will be a deterrent.
4. Consider CCTV – there are many cost-effective options available. We are getting fantastic results from door-bells with CCTV which can be remotely accessed from your phone.
5. Make sure your belongings have suitable insurance cover.
6. Take some photos of your belongings to aid its return if the police recover evidence.

You can contact us on 999 in an emergency and 101 or online reporting via the Surrey Police website if not an emergency. Alternatively you can report anonymously via Crime Stoppers.

Renewal of our Neighbourhood Forum

The designation of a Neighbourhood Forum lasts for five years and so our designation has expired. (See August 2019 update) This means that we cannot make changes to the Neighbourhood Plan (should we want to) and we are no longer statutory consultees as far as Woking Borough Council are concerned. Neither is currently a problem but to avoid issues later we have decided to seek redesignation of the Hook Heath Neighbourhood Forum for another five years; to do this we need to submit a request to Woking Borough Council similar to the original with a copy of our constitution.

A Forum Extraordinary General Meeting to arrange the above was held with the HHRA AGM at 19:00 for 19:30 on Monday 7th October at Woking Golf Club, Pond Road

Changes have been proposed re the track of aircraft heading for Heathrow. Your help is requested re interpreting exactly what the result may be for Hook Heath. We are not sure if this is just for when the wind blows from the East or whether it would be used with Westerley winds as well. (Please someone confirm).

Also of interest is that the landing pattern for aircraft heading for Farnborough already has them making a turn from heading North to heading East while over Hook Heath (they then make a further turn over the Knaphill area to get on a straight line for the runway). A further query is whether they will have these two aircraft patterns overlapping (please can someone look into this).

Communities may have greater say in protecting local trees

Michael Gove has launched a consultation on plans to create greater protections for trees in urban areas. Click here to see the announcement. 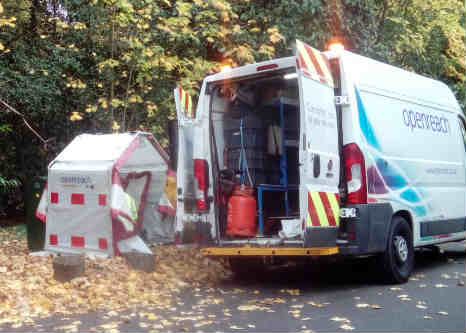 Fibre being fitted to a cabinet 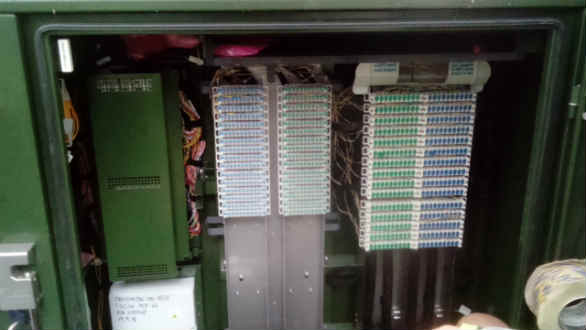 Inside a fibre roadside cabinet

For a long time the fibre based internet speed available for the Gorse Hill end of Hook Heath Road has been very slow ~ 14Mbs. Now that nearby phone lines have been connected to a nearer roadside cabinet with fibre the available speed has jumped to over 30Mbs 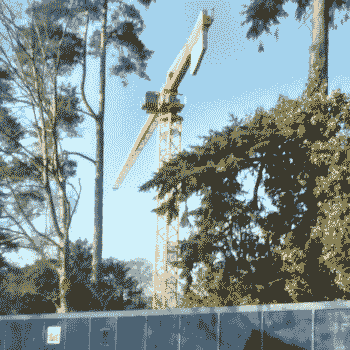 31 March 2019: As seen in the picture the crane mentioned below is now installed. It is massive and hovers over two houses in a way which must take a lot of getting used to. It is probable that the surrounding trees prevented a less intrusive position. Let us hope the crane will not be needed for long.

15 Feb 2019:Notice has been given that a large crane is due to arrive shortly to lift equipment and materials onto the site. Although this may tower over neighbouring properties the company has promised to do all it can to minimise the disturbance.

16 October 2018: Birchgrove, the retirement property company has purchased the Woodbank site. The company plans to retain the approved plan with the addition of balconies. The apartments will be available to rent with the anticipated age of residents being over 80. There will no longer be a restaurant, but residents will be able to purchase ‘packages’ for cooking, cleaning and laundry. Work is due to start November 2018. 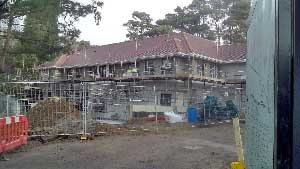 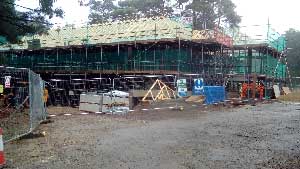 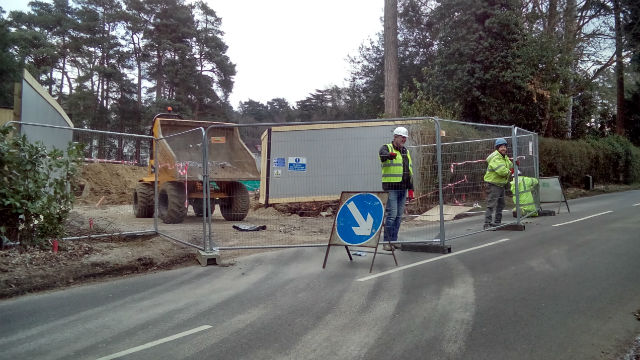 Work on the new entrance

In February 2018 a new entrance to the Gorse Hill Hotel site was opened up and became the main entrance in May 2019.

Annual General Meetings (AGMs) of both the HHRA and the HHNF

were held jointly at the Woking Golf Club, Pond Road on Monday 8th October 2018 at 7.30pm.

Swifts are amazing birds which visit our country in order to breed. Their numbers have been decreasing at an unhealthy rate. Woking coucil would like residents to report if they see one and put up nest boxes ready for when they return in the Spring.

Click here to read an article provided by Woking Council.

The Co-op store in Wych Hill was broken into in the early hours of 14th August. 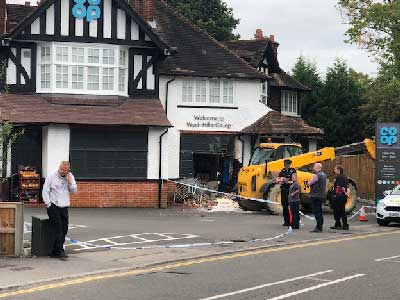 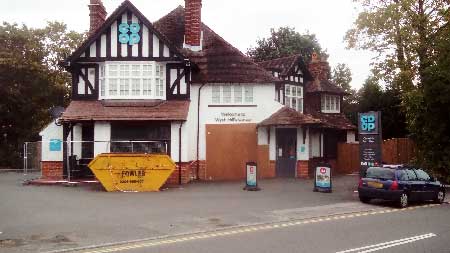 It was reported that an excavator was used at around 1.30am Tuesday morning 14th August to smash the front of the Wych Hill Co-op store. We believe the ATM machine just inside was stolen. On the left is a picture taken later that morning showing the area cordened off and police present. On the right is a picture showing the store back in operaton the following day.

Public meeting with the police

This was a general meeting that was open to all residents. There was discussion of issues of concern. Two police officers were present as well as two councillors. There was much discussion, mainly centered around the activities of groups of teenagers and traffic speeding.

We were out between 3-5pm. When we got back we found the front door and rear patio door showed signs of attempts to open. Limited damage. We suspect someone tried to reach through front door letter box and then went to rear. They may have woken lazy dogs who would have barked and deterred further attempts to get in.

A Note from a burglary victim in Hook Heath.
I am writing to advise you that we were burgled on Thursday 14th December and thought you may want to publish this to the HHRA members as soon as possible. These were particularly determined individuals and professional in their approach, not chance opportunists or bored children. Our neighbours who live at xxxxx were the original target but failed having been disturbed by the owners. The neighbours had security cameras installed and this picked them up quite vividly; 4 men sporting balaclavas and gloves and tools to break glass as they did with ours without effort. They were in their demeanour unbelievably brazen and even once disturbed stayed put to ensure that this was really a resident returning and not a delivery vehicle.

To cut a long story short they aborted at xxxx and proceeded within ten minutes to our property. If you have ever experienced this you will know it is an extremely intrusive traumatic experience, leaving us jumpy in our own homes, which should be a safe haven. We have now had cameras fitted and are looking at other deterrents.

Note added by webmaster after talking to both victims. All this is alarming enough but even more so is the brazen preparadness of this gang of 4. The room they broke into was occupied by a lively good sized dog which must have presented a ferrocious barrier. However they were prepared for this. They broke the lower pane of French doors and slipped in something laced with drugs to incapacitat the dog. They must have had to wait some time before the dog collapsed and they could proceed.

The following is from a BBC news item which can be viewed at www.bbc.co.uk/news/uk-england-surrey-32604462

More than 200 trees, subject to preservation orders, are to be felled in a Surrey cemetery after they were declared unsafe.

A survey at Brookwood cemetery found 241 trees in the 232 acre (94 hectare) site were diseased, dead or damaged. Of these, 205 will need to be felled after many became infected with a fungus which decays roots, leaving them vulnerable to high winds.

Permission has been sought by Woking Borough Council to remove the trees.

The council said it was consulting the planning authority and had notified Heritage England about the plans to take down the trees, all of which are covered by preservation orders. The council said: "All felled trees will be replaced in due course." The felling work is due to start on Monday and be completed by August, a council spokesman said.

How can you help reduce speeding in Hook Heath? 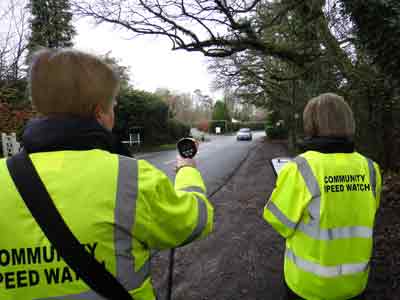 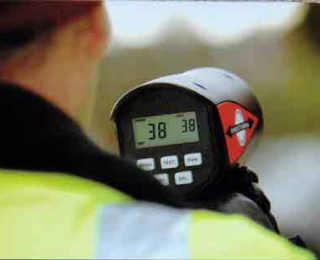 You can volunteer! Yes - you will be given training and can then join a small friendly local group to help 'do your bit' in keeping Hook Heath safer and thereby improve our environment. The training, visibility jacket and equipment is provided at no cost to the volunteers. Volunteers can choose their time and place from the rota and also avoid bad weather.

The Community Speed Watch is locally driven with active members of the community, supported by the police and local authority to monitor traffic speeds. The scheme allows great flexibility in when and where to monitor. Your input will be greatly appreciated by the local community that is currently concerned at the degree of speeding through Hook Heath.