The Cox family and the houses on Hook Hill

A sketch of the house Hook Hill 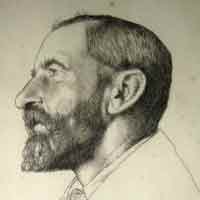 Henry Fisher Cox, son of the rector of Luccombe, was a scholarly man. While at Trinity College, Cambridge, he had made a special study of early 19th century literature, especially Hazlitt and Blake, and subsequently became editor of the Examiner, a weekly paper of liberal orientation and to which John Stuart Mill was a contributor. He gave much thought to the improvement of the agricultural labourer and wrote a book on the subject that achieved a degree of contemporary importance. He then, rather surprisingly, in conjunction with a college friend opened a firm of stockbrokers in the City at 29 Threadneedle Street. The business evidently prospered, for he was able to buy eight acres of land at Hook Heath, and in 1893 employed the architect Horace Field to design and build a house for him, which he called Hook Hill. Henry Cox had three daughters, Hester, Katherine and Margaret, by his first wife, but she became an invalid and died while the children were still quite small. He later married again, and there were two more daughters, Winifred and Sydney. Hester and Katherine were educated at St. Felix School, Southwold, then in its very early years, and Henry Fisher Cox was on the Board of Governors. His photograph hung on a passage wall in the School House, and probably does so still. When he died in 1904 his eldest daughter, Hester, was asked to take his place on the Board of St. Felix, remaining there for the rest of her life.

The Cox family must have temporarily vacated Hook Hill, for the 1901 national census records Gerald William Balfour, President of the Board of Trade, Privy Councillor, MP, as living there with his family and household staff at that time. He evidently lived there until work on his new Lutyens-designed mansion, Fishers Hill, was completed.

At the time when Hook Hill was built, it was the only house on Hook Heath, except for the Golf Clubhouse, and an old farmhouse next to it 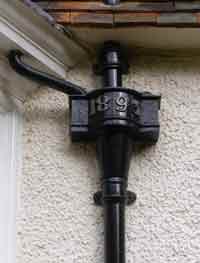 A detail of the rainwater system. Clearly cast iron and showing the date.

(Hook Heath Farm, later rebuilt and modernized by the Anstruther family), and there was only a rough track from the new house as far as Star Hill. Later two more houses were built on adjacent land in 1903: Gorse Cottage, originally called Hookerel, or possibly Cockerel, and Little Frankley . They were on land belonging to Henry Fisher that may have been acquired after his initial purchase of land in Hook Heath. The architect of both houses was Horace Field. After the death of her husband, Mrs. Edith Cox built Hook Hill Cottage, Horace Field again being the architect.. He evidently found the position so desirable that he had South Hill, with a thatched roof, built for his own use in 1907.

Edit Cox with her children
Winifred and Sydney

When Edith Cox left Hook Hill the 4th Duke of Sutherland, one of the wealthiest landowners in the country, bought it. It had become fashionable to keep country house close to London in addition to a house in town The “old“ duke died in 1913, and the following year his widow sold the property to Mr. and Mrs. Johnston-Higgins. They renamed the house Kilmorie, and the farmer who owned the adjoining land took the name Hook Hill for the house he built at the top of Hook Hill Lane. After the death of Mr. Johnston-Higgins, his widow had a new Kilmorie built for herself, again designed by Mr. Horace Field (his last commission before retirement and leaving Woking), further along Hook Heath Road, beside the entrance to Fisher’s Hill House. To this house, when he left public life, came Arthur Balfour, brother of Gerald, to spend the rest of his days with his family.

Meanwhile, in 1931 for a price of £9000 the original Hook Hill passed to new owners, the Lawson Reuss family, who brought the name of their previous house in Hook Heath, Whinfield, to it. They did not remain there long after the outbreak of World War II when it was requisitioned by the army, to house in turn men of the Irish Guards, the Wiltshire Regiment and the Royal Army Service Corps. After the war ended Mrs Lawson Reuss, by then a widow, moved to Merrywood, also in Hook Heath, and sold Hook Hill to Maurice Arthur Pryor in 1947. In 1951 Pryor sold the house and approximately half the land to the S. M. Property Co. (Surrey) Ltd for £7,500. The lodge and the remainder of the land does not appear to have been part of the sale. The main house was subsequently divided into two, Brockhurst and Whinfield, and Whinfield Lodge was converted into a more ambitious type of house.

Mrs. Cox lived at Hook Hill Cottage with her two infant daughters and Margaret, the third daughter of her husband’s first marriage, for about ten years. Hester and Katherine by then were living in a flat in London in what is now Petty France, near Buckingham Gate, and used to visit their stepmother frequently.

The plaque on the main staircase

The Cox family had two endearing ways of showing their affection and pride in their homes. At the original Hook Hill, halfway up the main staircase a plaque, beautifully incised with exquisitely formed lettering, reads: “IN WHOM THE LORD PUT WISDOM AND UNDERSTANDING TO KNOW HOW TO WORK”. Underneath are the names of all who had any part in the building of the house - first the architect, then the builder, the foreman, the bricklayers, the plumbers, the tilers, the labourers (who dug the foundations) and finally the bell-hanger, because there was even a bell-tower at the top of the house with a small gallery around it. Underneath this list are the words: July 1893 MADE THIS HOUSE April 1894.

At the other end of the house, just outside the back door, but under cover, is a polished mahogany board, recording the building of the kitchen addition, followed by a list of all those who had a part in it, and the words: April 1896 July 1896. This had been allowed to fall into disrepair, but the present owners have had it lovingly restored, and the names now stand out painted in black with red capital letters, and still the same beautiful lettering as on the original plaque. When Mrs. Cox had Hook Hill Cottage built, the same procedure was followed, and to this day there exists a white board, painted in black lettering, with the names of all concerned in the building.

The other unusual habit of the Cox family was autographing on the windows of their houses. This seems to have started at Hook Hill where a pane of glass has been preserved that bears the name “Henry F. Cox”, cut with a diamond. At Gorse Cottage, Margaret the third Cox daughter, cut her name on an upstairs window, and Mrs. Edith Cox cut her name and a cock on a ground floor window. Possibly this cock was the family crest, because a golden one acts as weathercock on a dovecot surmounting the stable block at the original Hook Hill. The full glory of this ‘cutting’ was to be seen at Hook Hill Cottage, where the east window of the dining recess of the long living room was used as the family’s visitor’s book, and name after distinguished name was cut there, giving almost a running commentary on the family’s history and their circle of relations and friends. Regrettably, the window was unceremoniously removed during renovations in the 1970’s.